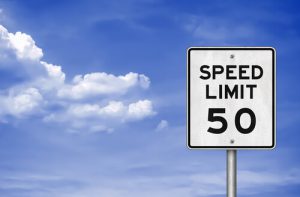 This measure was approved by a vote of 28-8 and will only affect sections of highways where the Michigan Department of Transportation and the Michigan State Police conduct safety and engineering studies to verify that a minimum of 85% of motorists are already driving at the new speeds. The 85th percentile rule is followed by many states when deciding to alter or set new speed limits, though the measure was not without controversy, as many believe increasing limits, leads to more crashes and accident fatalities. Many have also shown concern that higher speed limits do not mix well with the higher level of distractions drivers succumb to when driving.

Are 85% of Drivers already Speeding?

The 85th percentile rule states that drivers already drive at the speed they feel comfortable, and traffic is safest when motorists drive at approximately the same speeds. It takes into consideration the fact that the flow of traffic is more important than the speed itself when it comes to highway safety. In fact, it is usually a small percentage of motorists who abide by the speed limits on highways, and when only 10-15% of motorists do, that minority poses a threat to everyone else. If 85% of drivers are already driving at speeds above the current posted speed limits, it is reasonable for the speed limits to be raised.

In Michigan, sponsoring Rep. Bradford Jacobsen acknowledged that the average driver is already going 78 MPH on the freeway, and over half the population can technically be accused of speeding. “It’s ridiculous to say that changing what the sign says is going to kill more people,” he stated.

Roads that are likely candidates for increased speed limits within the next year include:

While many motorists will celebrate the controversial new speed limits, it’s important to remember that higher speeds increase the probability of serious injury accidents and death when a highway accident takes place. If you or someone you know has been injured in a Michigan car accident, the dedicated and skilled attorneys at Christopher Trainor & Associates are ready to evaluate your case. Call 1-800-961-8477 for a free evaluation today.