Do Police Officers Experience Consequences for Breaking the Law? 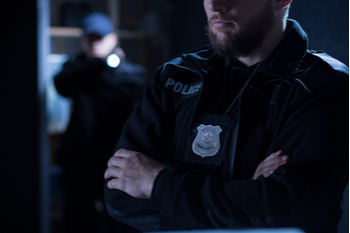 Police officers put their lives on the line every day for the safety of the public. But they’re also people who sometimes make mistakes, just like the rest of us. Unlike the general public, though, they often don’t face the same legal consequences for breaking the law that most citizens would. Research done over five years has shown that, on average, about 1,000 sworn police officers are arrested each year for committing crimes.

What Types of Laws Do Police Officers Commonly Break?

The study shows it’s not uncommon for police officers to commit crimes and that it happens more regularly in certain jurisdictions than others. Almost half of the crimes committed were done while on duty, and male police officers committed the majority of them.

Researchers broke down the most common police crimes into the following five categories from the most to the least, respectively:

The research showed that the most common type of infractions were driving under the influence, simple assault, and aggravated assault. Combined, those three made up one-third of the criminal cases that were reported.

What Consequences Do Police Officers Face for Committing Crimes?

Many police officers don’t face any serious consequences after violating the law. Likewise, not all police crimes result in a conviction. Nearly half of those cases did result in a police officer losing his/her job. One reason that so few officers lose their jobs after committing a crime is that their jurisdiction isn’t aware that they committed the offense in the first place. Almost two-thirds of police crime cases were booked in a jurisdiction where the police officer is not employed there, so their active department may not be aware of what they’ve done.

Additionally, due to comradery among officers and a routinely devout police subculture, many officers may maintain a kind of code of silence. Police officers rely on one another like they would their family – so it’s less likely they’re going to report misconduct by fellow officers. Because of this lack of reporting criminal police activity, the figures in this report are potentially understated.

What Can Be Done to Deter Police Officers from Committing Crimes?

A strong recommendation is that active police officers undergo criminal background checks every year, so no prior incidents slip through the cracks. New policies that detail standards on how to handle and respond to criminal misconduct or police arrests should be created. Additionally, it’s been recommended that officers be required to disclose and report to the applicable jurisdiction when an officer gets arrested.

Researchers also pointed out that many police officers report mental illness and a feeling that their lives are falling apart after an arrest. To prevent a worsening of mental illness or further criminal activity, a system that detects early signs of mental illness among officers could prove to be beneficial. When these warnings are picked up, the offending officer could be directed to an employee assistance program, if necessary.

How a Civil Rights Attorney in Michigan Can Help

Criminal cases against police officers and law enforcement agencies are complicated and are often challenging to prove. If a police officer has committed a crime against you, it’s critical that you seek expert legal counsel. The attorneys at Michigan Legal Center have two decades of experience assisting residents with severe cases, including those involving police corruption and misconduct.